The new owners of the pottery—incorporated in December 1915 under the name Medalta Stoneware Limited—acquired all assets of the defunct Medicine Hat Pottery Company Ltd. including the land, buildings and equipment. The plant must have been pretty well intact and ready to go as by May 1916, after some refurbishment, they were back in business using the stoneware clays from Eastend. But times were not easy for them either. Manpower shortages were developing due to the start of World War I, with many of the local able-bodied men enlisting in Medicine Hat’s own battalion, the 175th. In addition, Medalta was going head to head with well-established American potteries, particularly the one at Redwing, Minnesota, which had the western Canadian market all but sewn up. But Medalta persevered, and within a few years, they had captured the western market for stoneware products from the American firms and were starting to make inroads into the eastern Canadian market.

The visit to and the tour of the plant in 1919 by His Royal Highness the Prince of Wales and his entourage was an event to be remembered by those who were there. The workmen must have been proud to have their factory selected as one of the official places to visit. It certainly was not soon forgotten as Medalta proudly proclaimed the visit in 1922, and later included a photograph of the event in its 1924 catalogue.

“The plant of the Medalta Stoneware Limited has been honored by visits from the H.R.H. Prince of Wales, Ex. Governor-General of Canada the Duke of Devonshire and our present Governor-General Lord Byng of Vimy.”

In 1921, Medalta could make the proud claim of “shipping the first carloads of manufactured goods, other than cereals, from Western Canada to points East of Fort William.” That year they shipped thirty-four cars of stoneware to the east, and 1922 promised to be an even better year with projections of up to sixty carloads. 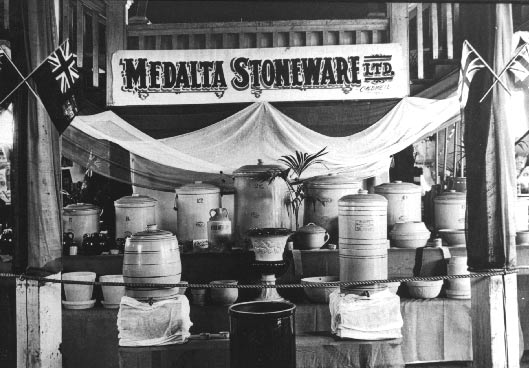 Medalta was equally proud of the fact that it was a Canadian-based company. Its slogan was “Canadian-made Stoneware from Canadian Clay, made by Canadian Workmen and financed by Canadian Capital.” From a workforce of twelve in 1916, capable of making about 800 gallons of stoneware per day, they had grown to about sixty in 1922 and were now able to produce over 5000 gallons per day. At this time they were even looking into the production of whitewares such as cups, saucers and dinner plates. An advertisement in the December 15th edition of the Moose Jaw Evening Times offered a chance to acquire one or more of Medalta’s one thousand $100.00 shares which would finance a plant “to be built to manufacture White Dishes from Saskatchewan White Burning Clay.” But for reasons unknown, these plans never came to be. It would be another fifteen years before Medalta got into the making of white dishes. 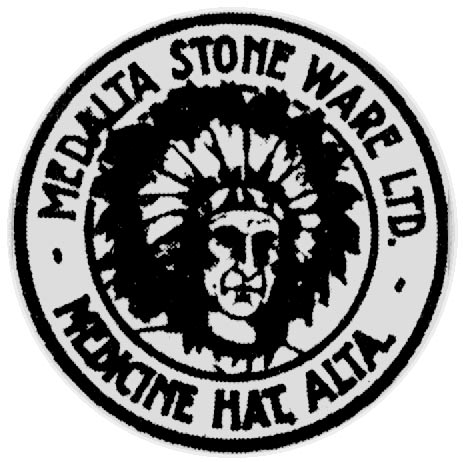 One of the first things that Medalta Stoneware Limited did was to design an attractive stamp to identify the items made in its factory. The stamp, about two inches in diameter, had the company’s name and location arranged around the head of an Indian wearing a fully feathered headdress. It is really unfortunate that Medalta had so much trouble placing a clear stamping on the side of its crocks, churns and water coolers, as the Indian head is quite stunning when it is clear. Most stamps, however, are faint and/or smudged, losing the detail. Eventually, it was replaced with other factory stamps which had the plant’s name within an oval.

We can only guess at what Medalta’s full line of products was in the early years as the records dating before 1922 are all but missing. Presumably, the line was quite limited until after the war, but we may never know for sure as the only pieces marked with the Indian-head stamp were the larger items like crocks, butter churns, jugs, water coolers and water filters. Smaller items like mixing bowls, pitchers, teapots, bean pots and flower pots were not marked with Medalta’s name at all, and we only know their availability from the written records that have survived.

One of these records is a price list dating to September 1922. It not only showed the wide range of products and the sizes of each, but also what they sold for. Can you imagine buying a one-gallon crock for 11.5 cents, a one-pint pitcher or a ten-inch mixing bowl for about 11 cents each, or a four-inch flower pot for only 4 cents? In spite of the detail on this list, it still does not reflect all items made by Medalta at this time. Several miniatures including a jug, crock and churn have been found that date to 1922, and I am sure that other products probably went unlisted as well.

In 1922, Ulysses Sherman Grant, Charles Pratt and W.A. Creer were still the owners, the three having taken over the plant around 1918. I had the pleasure of meeting Mrs. Reilly, the granddaughter of Mr. Grant, some ten years or more ago and she showed me dozens of items that her father had brought home from the factory. All were unmarked. Not one had a factory stamp on it. Many were one-of-a-kind items, prototypes of vases that never went into production. Others were main production lines such as French and milk pans, and she even had some of the miniature jugs and chamber pots. But one piece was extra special. It was a head modeled after the one from Mrs. Reilly’s doll.

Apparently, when the head of her large bisque doll was accidentally broken, her father took it to the factory to have a new head made. There the pieces were carefully glued back together, and then a mould was made. The new head was slip-cast and a little girl’s tears were changed to ones of joy. But why waste a good mould? Why not put it to good use? And so they did. Fifty solid stoneware heads were cast to be used as doorstops, and I must admit they would serve that purpose well for they were sturdy, a good size and heavy enough to prop most doors open.

In spite of its diverse line of wares, Medalta was not able to make a satisfactory profit for its investors. Perhaps it was the owners' inexperience in running a pottery, their failure to obtain the funds to buy the new equipment for making “white wares” or maybe it was just plain bad luck that led to the closure of Medalta Stoneware Limited. But whatever the reason, it was not for long as the plant was soon in production again, this time making pottery under the label of Medalta Potteries Limited.