Clark’s factory, like Medalta, struggled through the war years and into the new decade barely providing a living for its owners. Around 1922, the name of Gas City Pottery Limited was changed to Canada Pottery, probably hoping to play upon the new-found patriotism of Canadians who were being asked to buy Canadian. Perhaps he was just trying to take advantage of Medalta’s well-advertised slogan, but if so it does not appear to have paid off. In 1924, Clark moved back to Ohio leaving his son John to close the plant. With John’s help, most of their employees found work in the nearby Medalta plant. 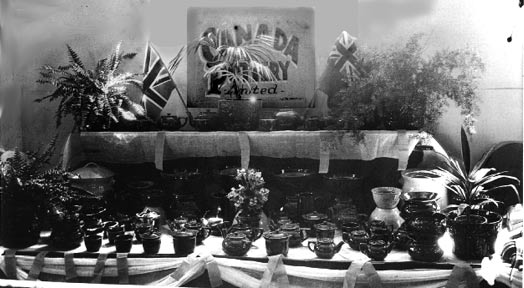 At present, the products of the Canada Pottery are known only from a single photograph. It shows a variety of items that were exhibited in a 1922 trade show. While it is quite dark, you can at least make out the general shape of most pieces which includes at least two sizes of mixing bowls, a pudding bowl, a custard cup, two sizes of petites marmites, two sizes of a low Boston style teapot, a Brown Betty or Globe style teapot, a milk pitcher, slop jar, cuspidor and jardiniere.9

Many of the pieces are finished in a dark glaze, probably a Rockingham brown. Crocks and slop jars were plain stoneware gray while the stoneware pudding bowl had blue mottling on it.10