Description: Jessie William Wyatt, the most skilled man Medalta had ever hired, proved his worth to the company. 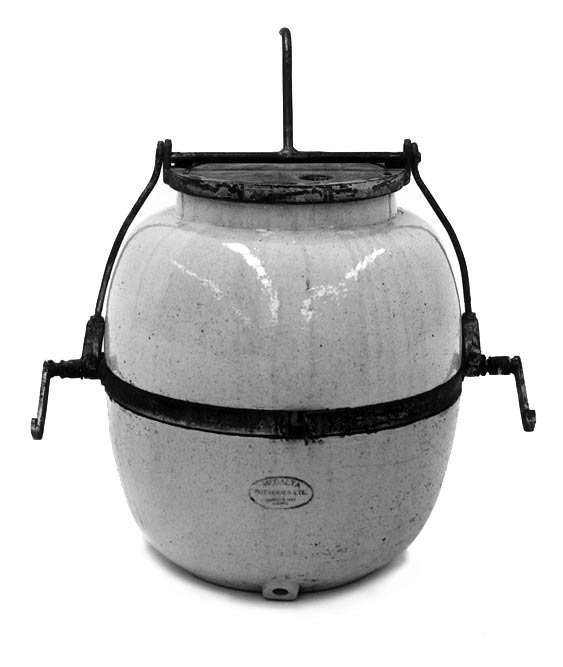 Perhaps a change in name can bring new vitality with it. That surely seems to have been what happened when Medalta changed its name from Medalta Stoneware Limited to Medalta Pottery Limited. Just why the name was changed has gone unrecorded, but perhaps it was a reflection of the owners’ intent to expand its product lines. Until now, stoneware products had been the bread and butter of the company. They had explored the white burning Saskatchewan clays only to find that they were not suitable for making the “white wares” around which they had planned the future of the company. Stonewares were still in high demand, though, especially the crocks, and new markets were there for the taking. But Medalta needed a strong man at the helm, one well versed in the pottery trade.

They found that leader in Jesse William Wyatt who took over as plant superintendent in late 1924. Wyatt, known as Bill to his friends, undertook his apprenticeship in Bristol, England. There he had learned all aspects of the trade from the front line duties of designing, mould-making, jiggering and preparing glazes, through to the construction of the kilns and the firing of the wares. He was the most skilled pottery man that Medalta had ever hired, and in a few short years he was to prove his worth.

One of the first things Wyatt did was convert the old American wine measure crocks to larger ones measured in British Imperial gallons. Thousands of old moulds were discarded as the new ones came on stream, and by February 1927, Medalta was actively promoting the new line by sending its agents and distributors window display cards to promote the Imperial sizes. They were quick to point out the obvious size difference, and to attract customers they were prepared to keep the price the same, at least for a short time.

“...Particular attention is drawn to the fact that the Medalta Imperial 6, holds practically the same as the #8 Wine Measure, also that the Imperial 8 holds more than the Wine #10.

...Stock MEDALTA WARE, (each crock stamped “Imperial”), and increase your sales. Advertising matter, in the form of Window Display Cards, is available for you.”

Medalta was into a period of change, trying to keep pace with the ever-fickle marketplace. The public was apparently satisfied with a plain crock, but not with a plain yellow mixing bowl or a dark brown teapot. Many customers were prepared to pay a little more for an attractive bowl for their kitchen, one of a different colour or with a bit of a design on it. Wyatt was quick to fill the requests coming in from Medalta’s agents. Over the next five years or so he designed hundreds of new products, adding many new sizes to their well-established lines. For example, forty and fifty-gallon crocks, a fifteen-pound butter crock and a ten-gallon butter churn were all added. You could now get all crocks in the drain-bottom style if that is what you needed. Some of the completely new products introduced were pigeon and canary nests, dog and rabbit feeders, seal top jars, tobacco jars, ashtrays and a cracker box. And the old styles of mixing bowls, pitchers and teapots were replaced with new attractive styles available in a variety of bright colours.