Description: Malcolm McArthur starts a pottery in 1958 in the old Medalta facility but it burns down in 6 months. 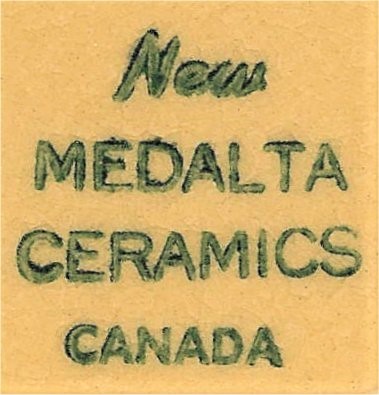 Malcolm McArthur, at last, had his own pottery. His stint with Alberta Potteries in Redcliff had been a short one; now he was ready to really try to make it on his own. With the same men that had followed him to Redcliff, he started producing wares under the name New Medalta Ceramics. The chosen name was an apt one as Mac had acquired the buildings and equipment of the old Medalta plant at a very reasonable rent, and perhaps he could develop a healthy business more quickly by using the well-recognized Medalta name. He even had Tom Hulme, Medalta’s art director, working with him, so he had no fears regarding the decorating end.

They quickly settled in at the old Medalta plant, and just when things were starting to look good, disaster struck. On that not-to-be-forgotten day, Christmas eve 1958, the phone rang telling him that the factory was on fire. There went his dreams up with the smoke from the plant. He had poured all the spare cash that he had into reopening the Medalta plant, and now it was all over.

The fire had been intentionally set, and Mac was pretty sure he knew who had started it. He even got the license number of a car leaving the area, but unfortunately, no proof could ever be found, and the culprit got off scot-free.

The one dream that Malcolm had brought with him from Redcliff was that of making it rich on his birch-bark barbecue set. In fact, just before the fire, he had more or less wrapped up a deal with Dairy Queen. Can you imagine the value of such a venture?—a fast-food company franchised all across North America. Of course, the fire killed that deal as well. 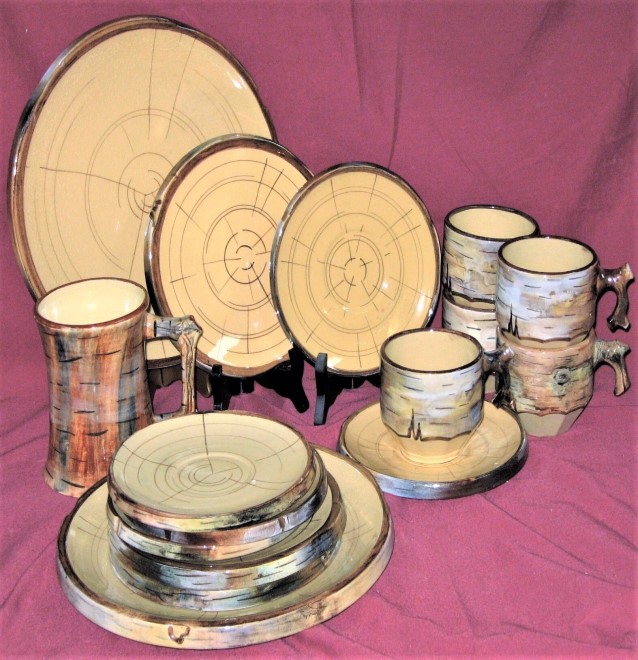 Birch bark ware, a trademark of the company

New Medalta Ceramics, however, did manage to produce some birch bark barbecue sets in the six short months that they were open. These sets are hard to find, but if you search hard and long enough you will eventually pick up a set stamped with his company’s name. Once again, the large plate was used to produce commemorative items. The one you are most likely to find commemorated British Columbia’s centennial. Basically, the design was a map of the province, reading at the top “British Columbia Centennial” and at the bottom “1858-1958.” As you would expect, the Dogwood—the provincial flower—was depicted on the left-hand side of the plate. On the other side where northern Alberta would be, you can find various crests. So far two crests have shown up, but it is likely that others were available as well. One plate exhibited the B.C. provincial crest while the other was Abbotsford’s. This plate was also an advertising piece as it had on the back “Compliments of Clayburn Harbison Ltd.,” an Abbotsford firm.

The mainstay of New Medalta Ceramics was the same as that for most of the potteries in the area—stonewares. They made crocks of various types and sizes and of course bean pots, but if they were marked with a company stamp, I have yet to see one. It is not too hard to find a sample of the beer stein which they made, and as was typical of the industry, they were emblazoned with a crest or decorated to commemorate a specific event. The one with the crest of the Royal Canadian Mounted Police on its side is now selling in the $75.00 range. Another, not so highly prized, or priced, was made for the Winnipeg Press Club and marked “Beer and Skits” above a comic scene. 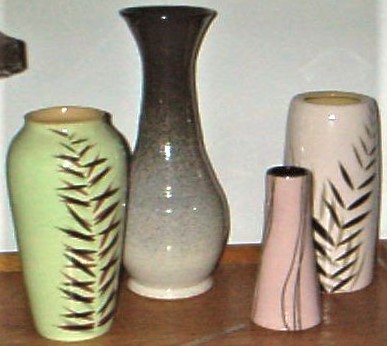 The only other products which they made that have shown up in collections are vases, and they made at least four different styles ranging from five to ten inches in height. They could be acquired in attractive glazed finishes from solid colours to ones decorated with floral and leaf designs. It is only recently that collectors and dealers have recognized just how hard it is to find pieces made by McArthur’s company. Some dealers are now asking up to $125.00 for a vase, but if you are lucky you can still pick up a bargain.