When Yuill finally decided to give up his Alberta Potteries at Redcliff, Shorty Matuska was there to lease the plant. In partnership with Bill Crockford, Matuska took over the kilns which Jesse Wyatt had built around 1932. Crockford kept the books while Shorty looked after the production end of the operation. He like many others in the pottery business had learned the trade after first starting with Medalta as a handyman in the late 1920s.

Medalta (1966) Limited got off to a quick start. They did not have to design and make a whole bunch of new moulds as they had apparently acquired many of the ones used by the Alberta Potteries. But half a year later disaster struck them too. It was a replay of McArthur’s—the factory burnt to the ground, leaving only the two beehive kilns standing.

But, that was enough for them to try again, and with a loan from the Alberta Government, they erected a new Quonset-style building. And what a building it was. It was such a disaster that it soon got the nickname of the “Wonder Building.” Matuska had cut corners by not hiring skilled carpenters, and he had not given much thought to what he was doing. The building was sound enough—too sound for it had no vents for the escape of moisture originating during the drying and firing process. It simply rose to condense on the metal roof, subsequently falling at times like a light rainstorm. But they were stuck with it. 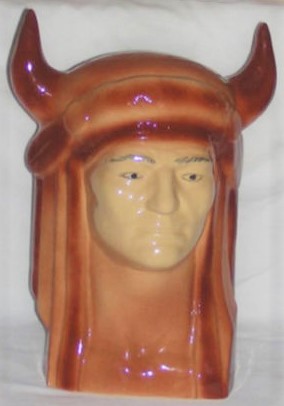 But the loan from the government was not enough to keep the faltering company going, so local investors had to be taken in as shareholders. One of these was Roy Ogilvie, and as time went on, he found himself getting more and more involved with the daily operation of the factory. Eventually, in 1971, when Matuska died, Roy had to choose between his farming activities and the pottery business, so he chose the latter. Ogilvie as owner and manager stayed on to run Medalta (1966) Limited until it finally closed in 1986.

Ogilvie, prior to his involvement with Medalta (1966) Limited, had no experience or knowledge of the pottery industry whatsoever. He soon picked it up, though, by reading everything he could find on the subject, but mainly it was through the good old means of trial and error. He learned the skill of mould-making, in many cases copying and/or modifying old Medalta moulds which the plant had acquired years before. And he quickly had to pick up the art of loading and firing a kiln as those jobs had always been done by Shorty Matuska.

Under Ogilvie’s guidance, the operation was never big—only fifteen to twenty workmen at its peak—but it was successful in that it was not losing money. It could have done even better but workmen trained in the pottery business were a dying breed. As the old hands retired or passed away, the plant was forced to cut back on its production. Young people simply were not interested in learning the trade. It was hard, hot, sweaty work and the wages were lousy. In its last years, the workforce declined to about five people. They could not even keep up with the orders that were coming their way.

The first products made by Medalta Potteries (1966) Limited, as expected, were similar to those of Yuill’s Alberta Potteries for Matuska had taken over the plant lock, stock and barrel. They had all the moulds from the Yuill operation and perhaps even a few going back to Wyatt’s time. In fact, when Medalta (1966) Limited put out its first price list in October 1966, it illustrated items with an Alberta Potteries stamp. They had not yet had time to make crocks marked with their own name.

This price list shows that stonewares were, once again, a mainstay. You could buy regular crocks in sizes from 1/4 to 20 gallons. butter crocks in three or five pounds, and bean pots from one to four quarts. Brown bean pots were the cheapest, but if you wanted something more colourful you could get one in a holly green colour. They also made ice water containers; the one was barrel-shaped like Medalta’s, the others were simply three or five-gallon crocks that had been holed to take a spigot. They also advertised an 18-inch high cylindrical-shaped pot as an umbrella stand, but it could, and would, serve equally as well as a florist vase.

Mixing bowls could be purchased from a small one just six inches in diameter to a large fourteen-inch one, and you could select from colours in plain cane to powder blue, pink or yellow.

Two styles of jardinieres, both in three different sizes, were available. The fairly plain one (referred to as a bucket in the price list) was straight-sided but widening from the bottom to the top. The other, more rounded, had vertical flutes running from the bottom to just below the rim. For your garden, you could get an 18-inch high pedestalled urn, and for your home a small 4-inch African violet pot.

Finally, as indicated on the price list, you could get a good variety of red clay products: flower pots from 2 to 10 inches, bulb pans from 4 to 8 inches, azalea and fern pots from 6 to 8 inches, and 10 and 12 inch hanging baskets.

Apart from this one price list, I know far too little about the products made at Medalta (1966) Limited, particularly the ones designed and made by Ogilvie. My research efforts largely concentrated on the Medicine Hat factories and not the Redcliff ones, and I never found the time to extensively interview Roy Ogilvie.

However I did visit the Redcliff plant several times, and from memory, I will have to recall some of the many products that I saw. Perhaps there are collectors who have a good number of Medalta 1966 items, but I have not yet run across them; therefore, I have not been able to draw upon that source either. It may just be that Medalta ‘66 products are too new for collectors to give them serious consideration, but now that the plant is closed, that may soon change.

Their small crocks were decorated for use as pantry jar sets. You could get them in attractive glazes or as a special commemorative set marking Canada’s centennial in 1967 or Alberta’s 75th birthday in 1980.

Ogilvie made a variety of small items such as whales, cups, jam jars (one with a turtle on the side), and miniature jugs. Some of these—the miniature jug for one—were given as souvenirs to the many school children that visited the plant on one of their field trips. For your living room, you could get an ashtray or a beer stein. The beer stein was regularly chosen to produce souvenir or commemorative items. Larger kitchen items included casseroles, milk pitchers, napkin holders or a salad bowl. For your bathroom, or that old commode in the corner of your bedroom, you could even get a washbasin and ewer set, and it was actually quite an attractive one.

Artwares were not overlooked either, although there may not have been very many of them. You can find a swan-shaped planter—much like Medalta’s but larger—and at least one style of vase.

I wish I had asked Roy about the bust of an Indian that he made. Some say that only a few were made and that it was supposed to be modeled after Geronimo, but I am not sure. Perhaps someone that worked for Medalta 1966 will be able to tell us for sure.

Where there was a need, Roy stepped in to fill it. One such example was the chicken fountain saucers that he made. Among the original Medalta stock that he had picked up—and I do not know the details such as why or when he got the stock—was a bunch of chicken fountains; but, since there were no saucers to go with them, Roy made up some moulds in order to sell them as complete units. Another example was lids for butter churns. Many Medalta collectors had churns that were missing their lids so that became another product which he made.

Medalta’s Cypress pitcher showed up under their name as did pudding bowls and ice buckets. These moulds must have all been with the Medalta stock that Medalta 1966 acquired.

They also made some items using moulds from the Alberta Potteries or Sunburst plant. The one you find for sure, and there may be others, was the mould for the birch-bark pattern cereal bowl. Once you become familiar with the glazes used by Medalta (1966) Limited, you can readily pick theirs out from the others as they were brightly coloured with a variety of speckled and flowing glazes.

To close the story on Medalta (1966) Limited, I would like to warn you that not all its items are marked with their own stamp. To muddle the picture for collectors, Medalta (1966) Limited used one of Medalta’s rubber stamps to mark some of its products. When I asked Roy about this, he told me that it was simply a matter of expediency. At the time, they did not have a stamp small enough to fit the bottom of little items such as cups and jam jars. They did, however, have a box full of old Medalta stamps; so, they simply rummaged through it hoping to find one suitable for their purposes.24 Unfortunately for collectors, they did find one, and that has led to more than one case of mistaken identity.