Description: Medalta Potteries, of Medicine Hat, Alberta, made an amazing variety of round flat ashtray from 1930-1954.

Medalta’s round, flat ashtray was so named by the company as it is both round in shape and has a flat rim extending about 3/4” from the straight flared walls of the base. It stands about 1” high and has three butt holders evenly spaced around the flat rim, each butt holder marked by an elevated ridge on each side to keep the cigarette from rolling off. It is these three rim segments that make the ashtray an ideal one for advertising as the name and location of the business could be placed on the rim with additional advertising or, better yet, a scene or picture in the center. The flatness of the rim and the central ash cup permitted the application of clear sharp naming and images.

This ashtray was produced by Medalta from 1930 to about 1942. While it is shown in a trade show photograph dating to late 1930 or early 1931, it likely dates to early 1930 as an order placed by Bradley’s Taxi of Edmonton was filled in March 1930. The termination date is not positively known as the surviving Medalta records are so skimpy for the period 1942 to 1954.

Few of the round flat ashtrays are actually dated on the piece itself, but we do have an Alazhar piece dated 1940 and an I.O.O.F. Grand Lodge piece dated 1939. Other dated pieces appear in 1937 and 1938. The last actual reference I have for this ashtray appears in a letter dated 29 December 1941 when Medalta asks why the ashtrays made for and named to the Riverside Hotel in TwoHills, Alberta, were returned. Based on the present evidence, I think it unlikely that the flat ashtray was made after World War II, but I could yet be proven wrong.

Examination of the ashtrays in various collections reveals that the moulds for making this ashtray changed over the years and that the size varied quite a bit. The first ashtrays appear to be larger than the later ones. They measure 5.5 to almost 6.0” in diameter while the later ones range from 5.25” to 5.38” in diameter. 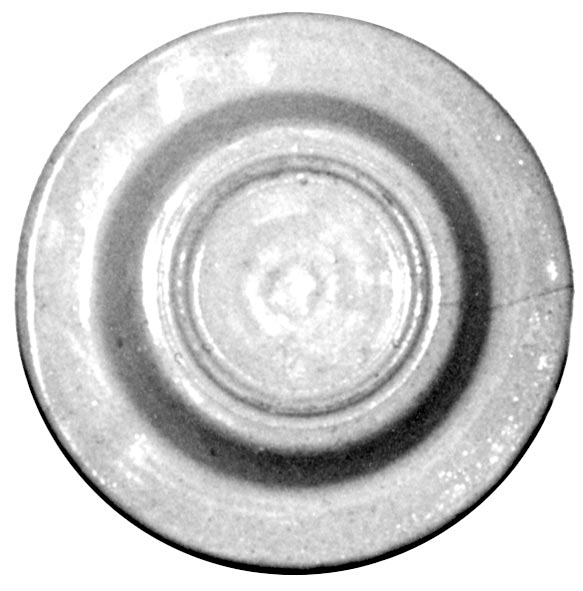 Around 1937 or 1938 the bottom of the ashtray also saw a minor modification. The early varieties have a slightly elevated ridge encircling the bottom on the inner side of the basal rim while the later ones do not have this ridge. However, I should point out that this ridge is not a good date indicator as some ashtrays dating after 1938 were produced on the ridged bottom variety. All we can really say is that pieces without the ridge date to 1938 or later, and that Medalta was replacing its old moulds as they wore out through use. You can also find different diameters across the bottom resting ring, but as I seldom took such measurements it is not known how they relate to other production changes.

The flat ashtray was quite popular as an advertising medium as sixty-nine different named pieces have been found so far. Five of these were produced for merchants carrying Ogilvie’s Flour products as advertised in the center of the ashtray. The Ogilvie ashtrays have been seen with either green or blue rims while, for the most part, the other ashtrays are usually finished in honey or yellow colours. So far all but one of the pieces made by Medalta (as indicated by one of the factory stamps) have been advertising pieces. The lone plain one, finished in a turquoise blue glaze, was marked with the G.33 stamp, indicating a late 1930s to early 1940s date.

Open style block lettering as depicted in the Silver Foam ashtray was preferred over solid block lettering as it not only looked neater but any poorly executed lettering was not so apparent. The lettering was most commonly in brown against the honey, tan or yellow background, but black was often used as well, particularly in the earlier years. Below I have listed all the named pieces that I have recorded in collections. Although many other orders were placed by and filled for hotels and other businesses, they are not listed here as I do not know if the order was for this style of ashtray or for the Stetson shaped ashtray since both cost the same in 1937, selling for $21.50 per gross (144).

The listing shows that hotels were the most frequent buyers of Medalta’s flat ashtrays. Of the sixty-nine pieces seen to date, twenty-six bear the names of Hotels. Retail stores of various types were the next largest group with about 20 entries, but you can also find garages, breweries, lumber yards, lodges, clubs, a convention, reunion and even a royalty souvenir on the list.

One person who had a friend in the hotel business told me that it was common, and almost expected, for an overnight patron to take something with him as a souvenir, be it a pen, book of matches, towel or ashtray. Perhaps this explains why some hotels were placing repeat orders over several years. For example, in the Medalta sales ledger, you can find several entries for the Alberta & Queen’s Hotels in Edmonton, and in all likelihood, these separate sales are represented by the three named varieties that you can find for this hotel.

Not all of the ashtrays were decorated with an image in the center but many were, usually depicting the windmill scene (either hand-painted or rubber-stamped) or the stenciled sailboat design. A few depicted a subject mindful of the business advertised. Several hotels showed the actual hotel; a brewery, the Kakabeka Falls after which a brand of beer was named; a garage, a scene of a car motoring on a country road; another garage, a large V with an 8 within the V; the Alazhar Temple, the Masonic emblem of the scimitar, crescent and star; and Spence’s Shoes, what else but a high heeled ladies shoe.

These specially decorated pieces are more sought after than the undecorated ones or even those with the usual windmill or sailboat scenes. At today’s prices, I believe that most of these pieces would sell in the range of $175-$250.00, but admittedly I have not heard of any being for sale in the recent past.

I will not try to list the size of the orders here as I do not have such information for most of the orders. However, the majority of orders showing in the 1937 sales records were for a gross billed at $21.50. Other orders that I have been able to match to sales records have usually been for a 1/2 gross or a simple multiple of a gross. The largest order that I have run across was for 5000 ashtrays ordered by the Sudbury Brewing and Malting Company Limited in 1938 and they may have ordered another 2500 ashtrays earlier in 1935. Their ashtray order is the one marked “SILVER FOAM | RICE LARGER | ALE AND PORTER” and so far I have seen three variations, one with the windmill decoration and two different scenes of the brewery itself. I am sure that collectors have picked up pieces not included in the following listing, and if you let me know about them, I will include them in a future issue of this newsletter. 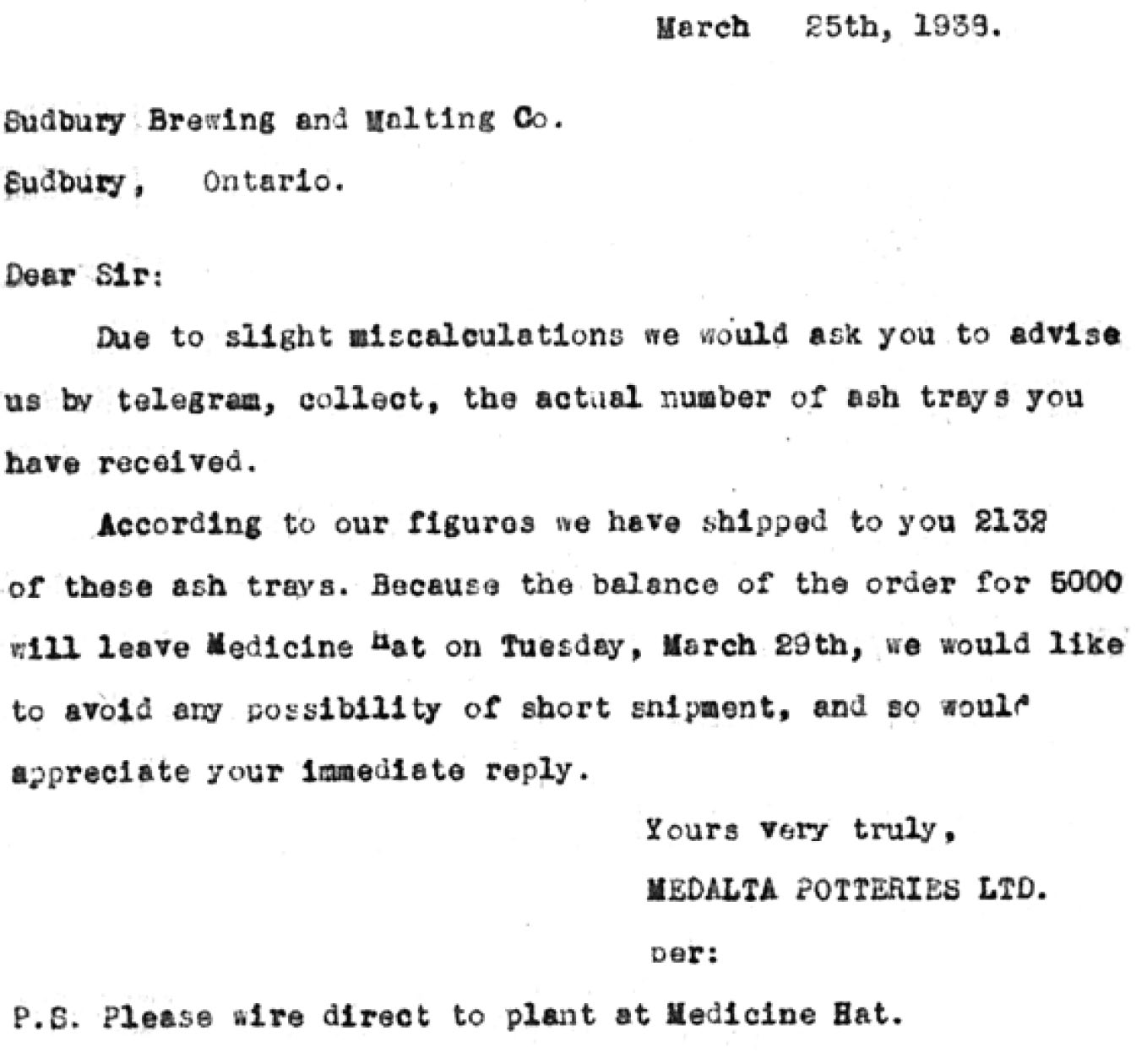 Found at the Blue Mountain Antiques Show in Calgary. Is colour, a deep maroon, struck me as being Medalta’s. Indeed it was a Medalta piece, bearing the G.33 stamp variety which dates it to 1940 or later.

It measures 5 1/8" across the base, stands 1" high and has three butt holders evenly spaced around the 5/8" wide brim. What sets this ashtray apart from other Medalta ones is the sloping sides and the extended rolled edge around the base. My guess is that this ashtray may have been produced from a mould obtained from Wyatt’s Alberta Potteries Limited as it is similar in form to one of his ashtrays. His ashtray, like this one, has the wide upper rim, sloping sides and three butt holders; it differs in being 1/4" smaller in diameter, in not having the reinforced roll around the base and in having an embossed buffalo design in the bottom of the ash trough. 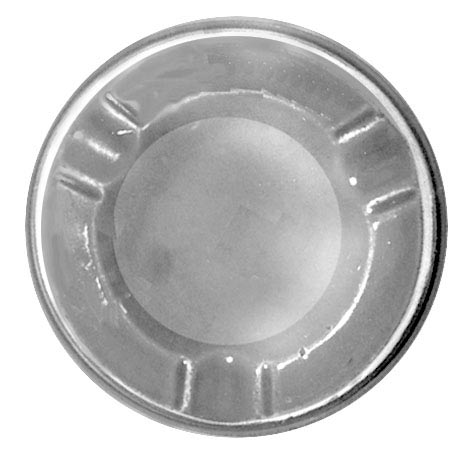 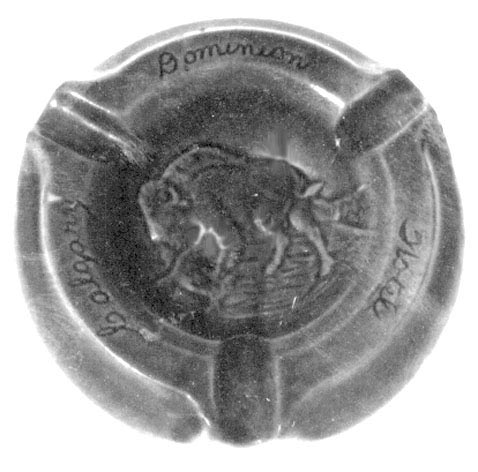 The second ashtray is unlike anything known to have been made by any of the other potteries in the Medicine Hat area, but I have seen British equivalents. It is a matchbox holder ashtray as opposed to the match booklet style of holder. It has a central cylindrical stem mounted in the centre of a round dish-shaped ashtray. The central piece in turn has a rectangular opening at the top into which the matchbox fits. As the matchbox is slid into place a rectangular block at the bottom of the stem opens the box to expose the matches. The central stem also has an opening on each side to expose the rough striking strip of the matchbox. 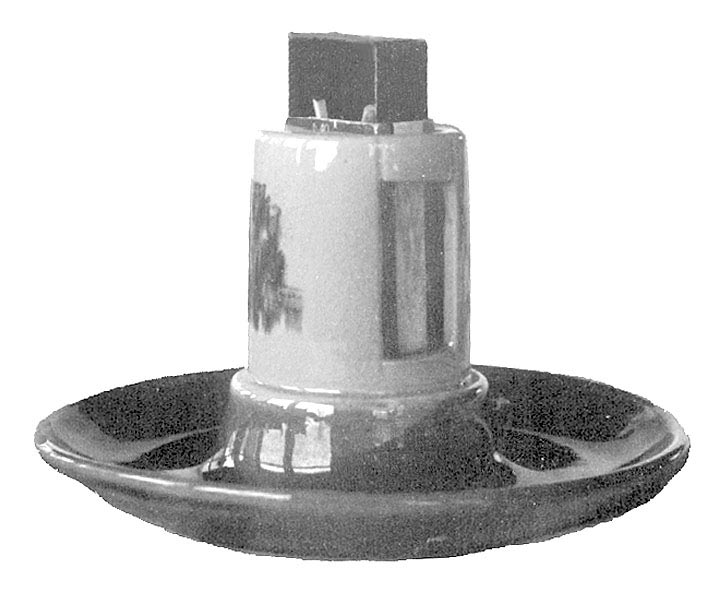 The ashtray is 6 1/8" in diameter across the base and stands 3 1/2" high. In the photo shown here it looks a bit higher as it has a matchbox mounted in the well. The base is glazed in dark green while the central cylinder is cane or yellow. The dark oxide design on the side has run so badly that you cannot make out any details. To me it looks like it may be a building such as a hotel or brewery, but that is more a guess than fact due to the poor image. The stamp on the bottom of the ashtray is G.23 (the small maple leaf). The colours of dark green and cane suggest a date to the early 1930’ s but once again that is largely a guess as the small maple leaf was still in use as late as 1942.

I have not been able to find a reference to either of these ashtrays in Medalta’s records. As to their value I only can suggest the range where I would expect to find them as so far each is known by only a single example. The matchbox holder one, especially if a sample shows up with a clear image on it, or better yet advertising for a particular company, would likely fall in the $125 to $250.00 range. With the runny image one would expect it to be about $80 to $125. The round, low ashtray would be much less due to its simplicity in style, in the $40.00 to $60.00 range.