When a member of this Facebook group asked if anyone had seen the Hotel Wales creamer, it jogged my memory that at some time in the past I talked to the lady that brought her Hotel Wales dishes from Ontario to Medicine Hat when she took a road trip across Canada. It was her grandfather that owned the hotel. This is a transcript of the conversation I had with her in March 2012.

Marijane told me that the Hotel Wales was built by her great, great grandfather Robert Cadogen Thomas (1862-1950) who married Agnes Egerie Louise Shaw (daughter of Samuel William Shaw of Midnapore) which is likely where the lazy S brand came from. The other brands “FD9” and the "box arrow" were family brands. The family had the Box Arrow Farm on Rideau Lake, Ontario.

The 11-story high Hotel Wales, located at 709 2nd Street SW (at the corner of 7th Ave. & 2nd Street) was built in 1930 and torn down in1974. The hotel was owned and managed by R.C. Thomas until his death in 1950. But Marijane did not know the specifics as to how the family came by the dishes or who owned the Hotel Wales at the time it was torn down.

What was most interesting about the dishes that she brought to Calgary was that they had the imagery of the Hotel Wales dishes that I had recorded, but none of her dishes had the name Hotel Wales at the top, only a scene of a fence and gate with a trail leading through the gate towards the low hills in the background. They also had a different factory stamp on the bottom of the items which was in use in use from 1947 to 1952. 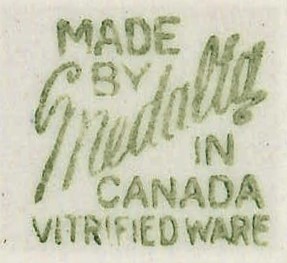 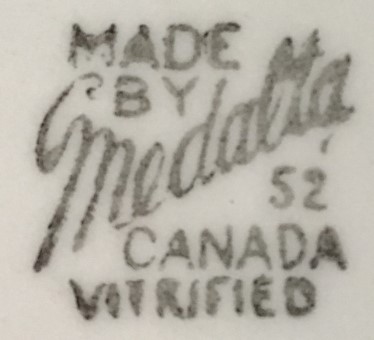 All the pieces marked Hotel Wales at the top were marked with later stamps dating from 1952 to 1954, but you can also find dishes made by Syracuse China, presumably the company that made the plates after Medalta closed. 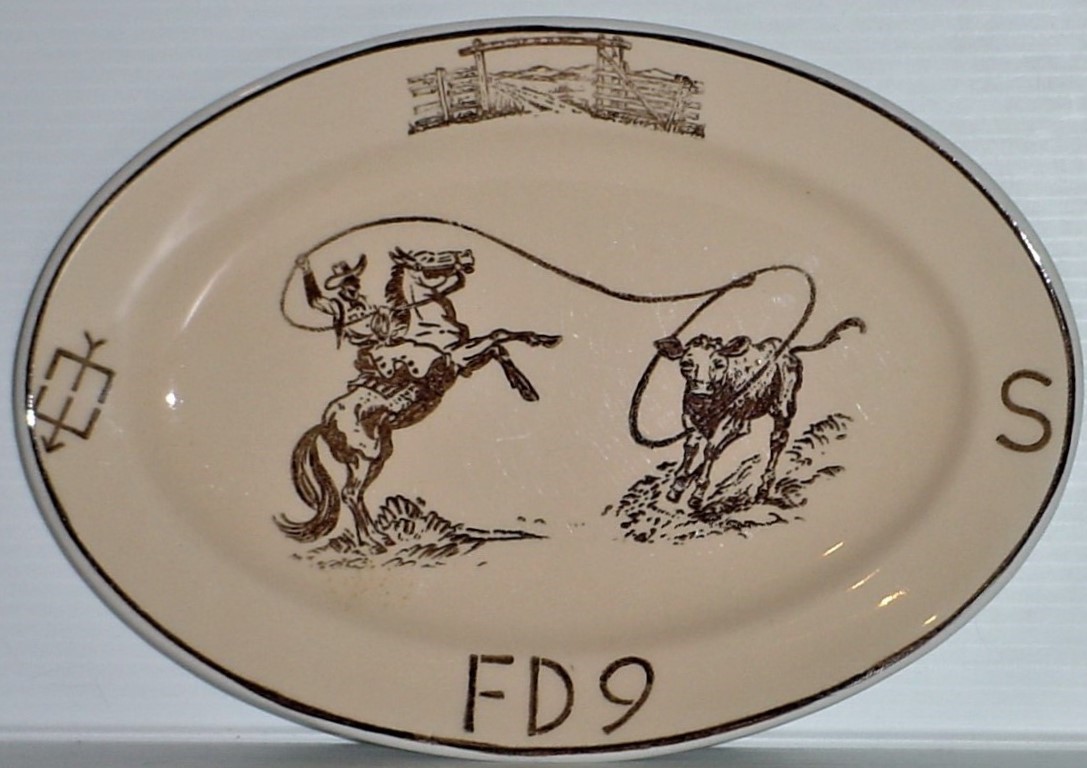 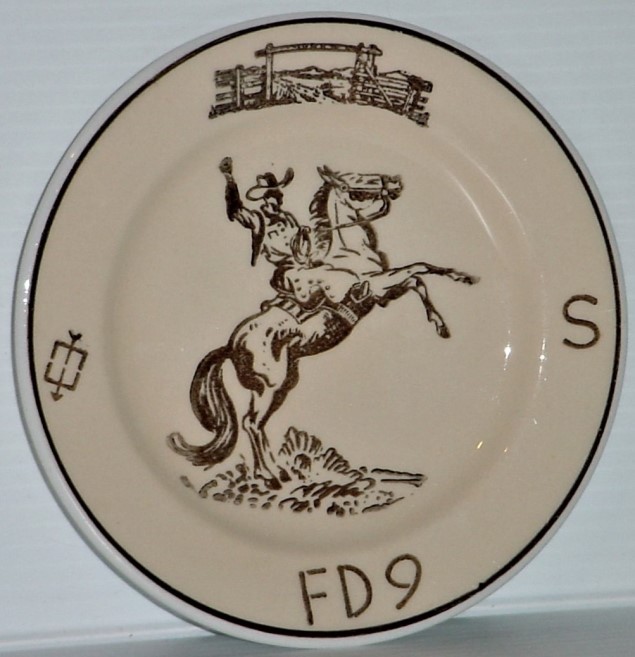 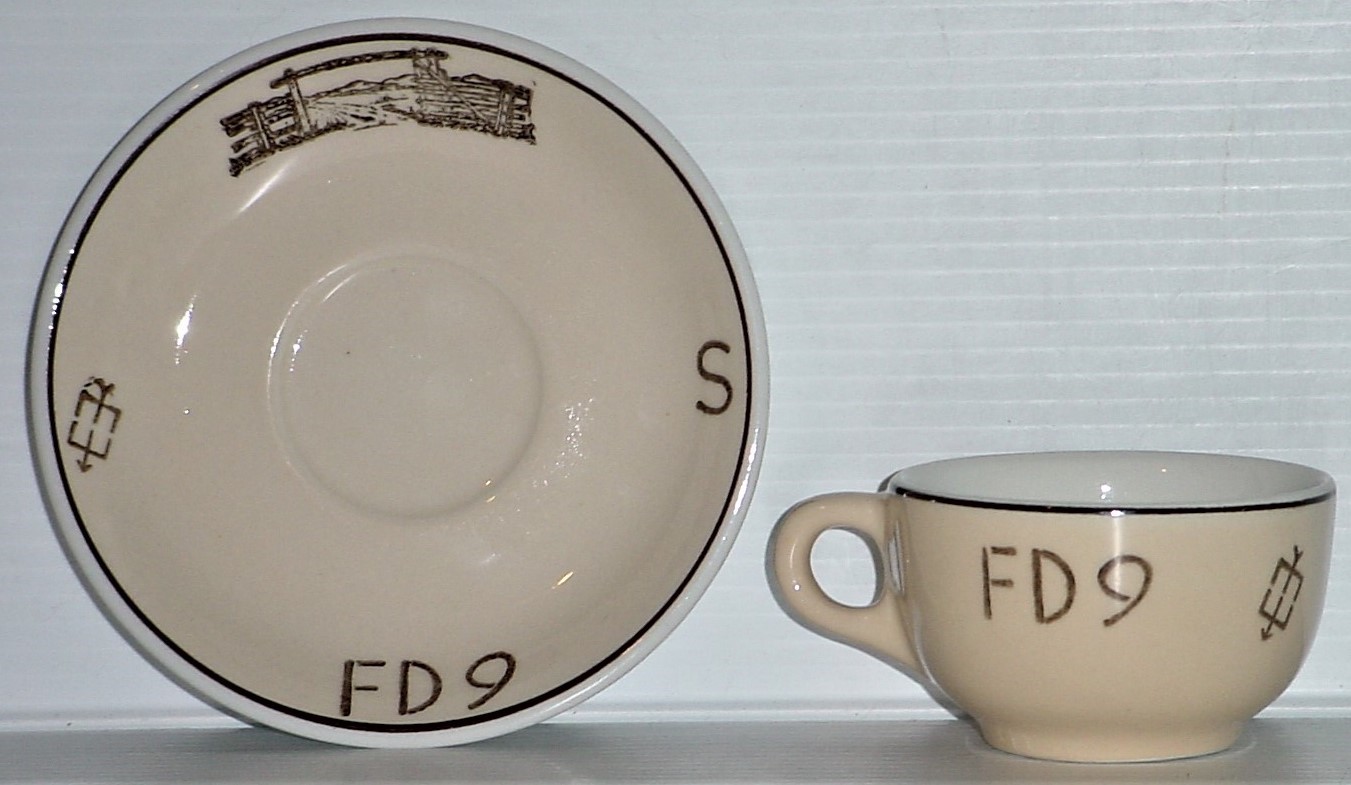 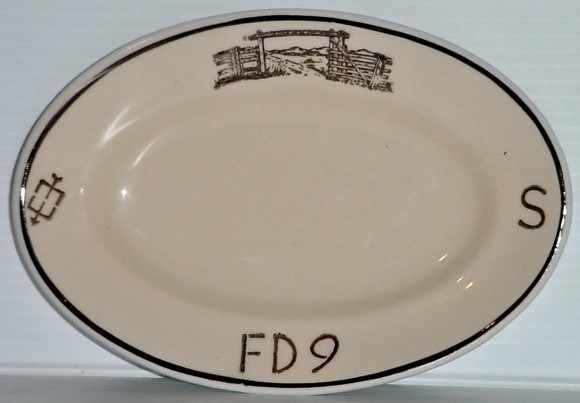 The dishes with Hotel Wales, Calgary, at the top are not too hard to find and for most of the products shown here I have recorded two or more specimens. Most are stamped using one of the three Hotel Wales stamps made for the express marking of the restaurant’s products, but I have recorded at least one example where the dated 1954 stamp was used. 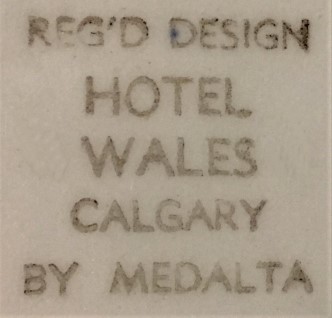 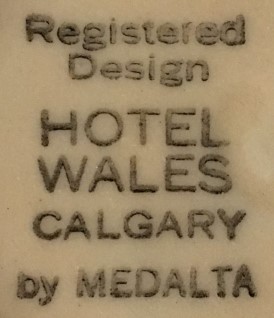 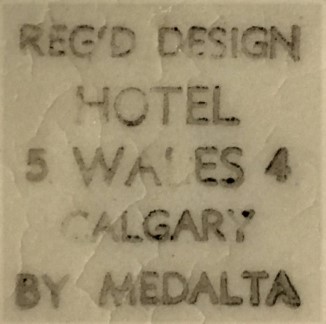 The teapots are easier to find than most pieces, but perhaps most collectors do not know that they can be found in two different sizes. The smallest one is 2 7/8” h., while the larger one measures 3 3/8” high. Presently I have only seen one example of the large one. 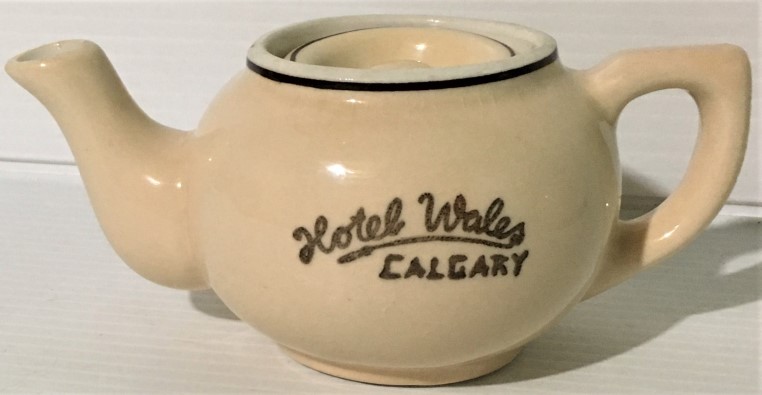 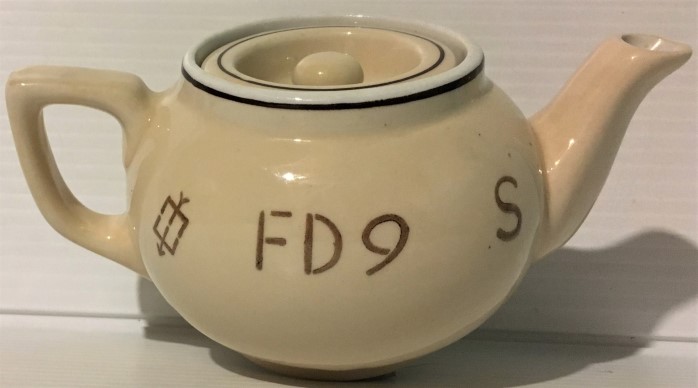 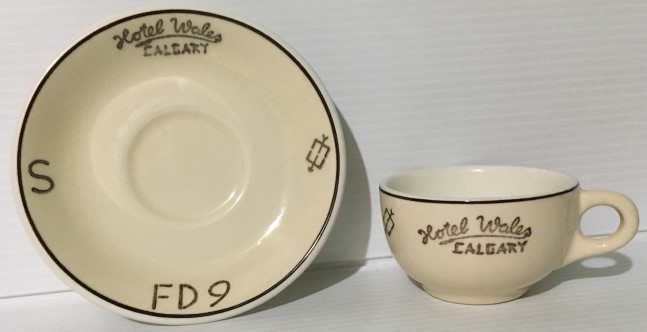 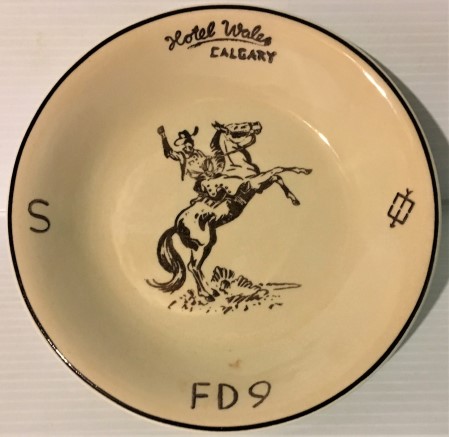 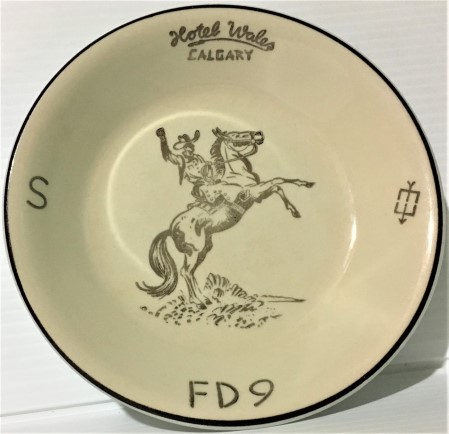 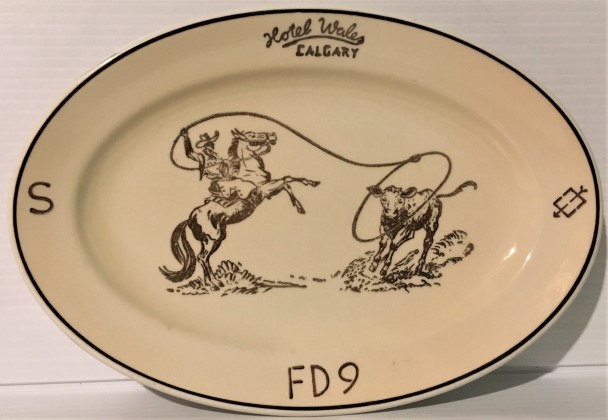 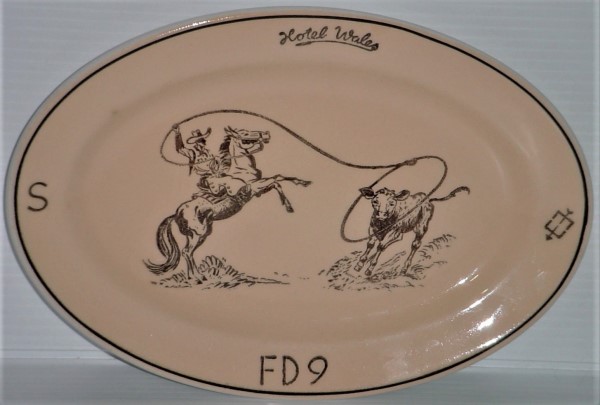 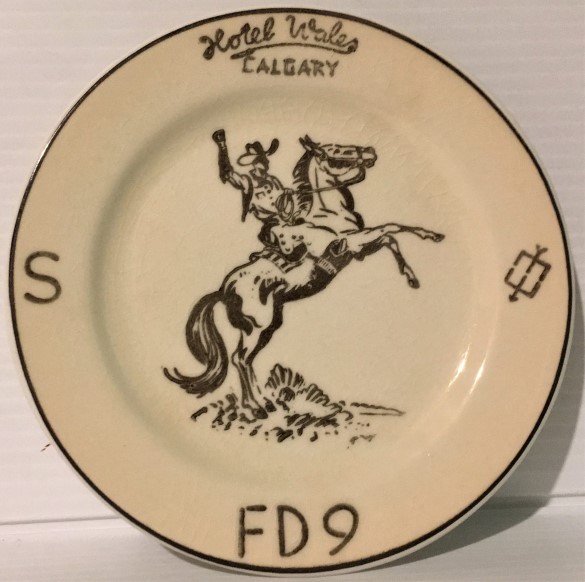 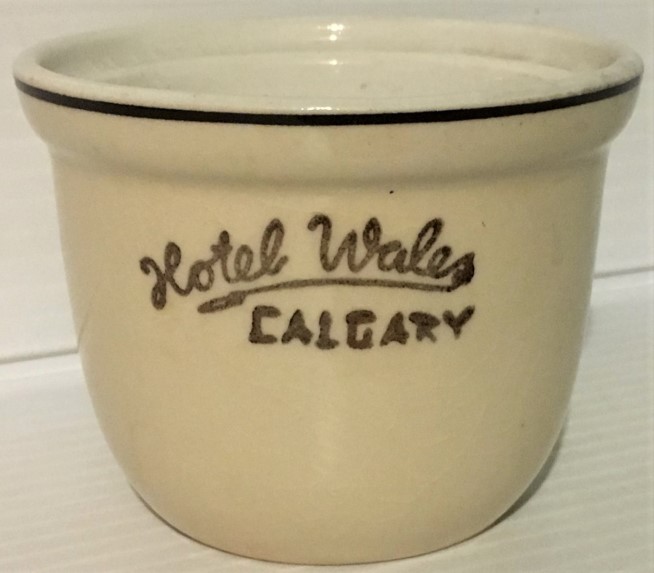 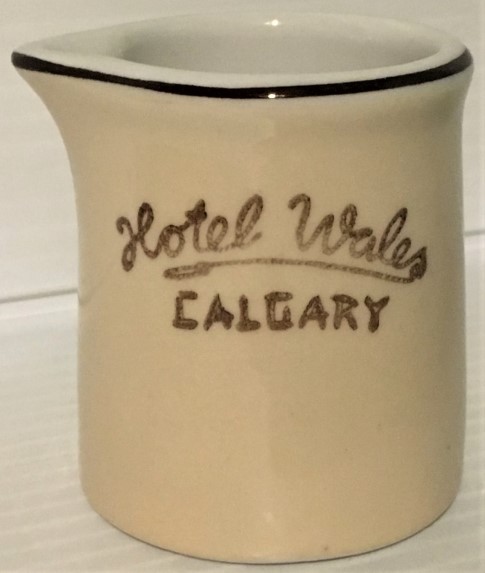