The end of the decade saw another major change at the Medalta factory with Wyatt opening a whole new field. Its artware line was introduced. By 1929 Medalta was ready for a major shift in its production. The ownership of the plant had changed hands again—but not the name this time—when the assets of Medalta were sold to R.C. Carlisle and O.C. Arnott of Calgary. The stoneware trade was rapidly declining as glass bottles became the container of choice for wine and ginger beer. At the height of the market in 1927-28, Medalta was making over a quarter of a million one-gallon jugs a year, and even more beverage bottles. It was Medalta that kept the liquor commissions of Alberta, Manitoba and Saskatchewan well stocked with various sized jugs, from a small half-gallon to a large five-gallon one for the serious imbiber. Thorpe’s, McLaughlin’s, Ye Old Country, Douglas & King, Phillip’s and Gurd’s were all getting their ginger beer bottles from Medalta.

To set up Medalta’s new art department, Jesse Wyatt hired a young man from England. Tom Hulme signed on in 1929 and remained with the factory until it closed its doors in 1954. While Tom was busy getting the needed supplies and equipment, selecting decorations, preparing stencils and training the newly hired staff, Bill Wyatt was making the moulds for their new art line.

By 1930, Medalta was ready to introduce its new attractively decorated products including a wall plaque, several styles of vases and two sizes of lamp bases. The next year they added several jardinieres, six or more new vases, another three or four lamp bases, three different cookie jars and several figurines. The latter included a parrot, another bird, a buffalo and a bear which you could get as either a polar bear or a brown bear. They proudly showed their new artwares at several trade shows held in 1930 and 1931. And they were indeed stunning.

The most popular glazed designs included a cottage scene, a windmill with the blades peeking from behind the building, and the ever so popular silhouetted owls sitting on the branch of a tree. For the discriminating homemaker, or one who could afford it, Medalta produced some special pieces such as the gold fuzzy owl or gold fruit. The fruit pattern was a purple plum with the border accented in gold, while the owl was handpainted in such detail that almost every feather was shown. These special pieces, taking more time to decorate and using the expensive gold trim which also meant an extra firing, cost four times that of a regular decorated piece. By far the most common decorative technique though was to finish the vase, jardiniere, bulb bowl, lamp base or figurine with coloured lacquers. An extra firing was not needed when these coloured paints were used. Once the item left the art department it was ready for the store shelf. 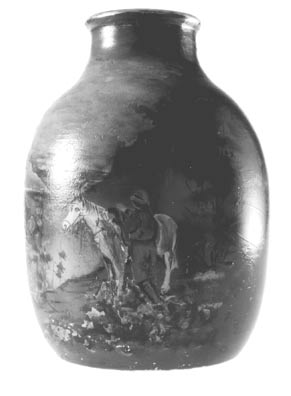 Hulme’s lacquered patterns were many including the daffodil, tulip, apple blossom, bluebell, grape leaf and flower, daisy, iris, cornflower and buffalo berry. The “fruit” patterns included peaches, grapes, plums and later chili peppers. Flowers & fruits were usually depicted in detail, but some were stylized such as the stenciled tulip. Geometrical patterns were also available for a short time. One of these can best be described as a chicken-wire pattern, while another was simply a splatter of gold or silver coloured lacquer on a red, blue or green background. Popular hand-painted patterns included the sailboat, gondola, a bird in flight or sitting on a branch, a Dutch pastoral scene and camel in desert scene. Spriggd êpatterns—ones raised above the surface of the vessel—included the very popular Dutch boy and girl often with a mill behind, an Indian man and maiden, the Chinese dragon, swallows flying over water lilies and a pair of storks

That Medalta’s new artwares were popular is attested to by Medalta having to hire thirty or more workmen to keep up with incoming orders. From a small start in 1930, Medalta’s art line was to expand to over 200 different products and well over a hundred different designs, stencils and glaze mixtures.