The year 1937 was a busy one for Medalta with major changes taking place at the factory and to the pottery industry itself: Hop Yuill was building his own pottery to go into direct competition with Medalta; all of Medalta’s experienced workmen were “jumping ship” to work in the new plant; and even Karl Baumler and Walter Armstrong had taken positions at Yuill’s Medicine Hat Potteries, but not before helping to find a new superintendent for Medalta.

Ed Phillipson who was fresh out of school and trained as a ceramic engineer took over as Medalta’s new superintendent, but not without some trepidation. His first tour of the factory was almost enough to send him packing. The plant was run down, the equipment was old and outdated and the kilns were not to his liking. He could not really see much of a future with the plant. But he changed his mind and took the position when told that $250,000 would be invested in the plant. Now the challenge was on, especially with Yuill’s new pottery about to open.

Improvements quickly got underway: new equipment was acquired, some of the kilns rebuilt, and new product lines were brought out. Phillipson’s new fireproof ovenwares found a ready market once he had perfected the white-lining of the new style casseroles, pie pans, mixing bowls and roasting pans. But more was yet to come.

The next year Medalta was off on a whole new adventure, one that offered Ed ever so many challenges as a ceramic engineer. The white clays from Willows, Saskatchewan, that he had been asked to test, turned out to be a high-grade ball clay. Medalta could make hotel china with this porcelain clay, and best of all they already owned the clay deposits.

Over the next two years or so Phillipson developed a full line of hotelwares. Tablewares included dinner and side plates, soup and salad bowls, cereal and oatmeal bowls, oval platters, cups and saucers, coffee mugs, teapots, creamers and sugar bowls and many other specialty items. A good assortment of ovenwares was available: oval and round bakers, ramekins, cocottes, pot pie dishes, au gratins, shirred egg and rarebit dishes, sole dishes and custard cups. Serving dishes included muffin covers, fruit comports, salad bowls, olive and celery trays, gravy boats and ice water jugs.13 And they were really good products, standing up well to heavy restaurant use and going through an automatic dishwasher several times a day

The sturdiness of Medalta’s hotel china was unexpectedly and indelibly driven home when a person I was visiting intentionally knocked a plate off his kitchen counter. “See,” he said, “nothing short of a direct blow on the edge of the plate will break it.” He may have been right, as the plate bounced on the linoleum a few times, but did not break. I was all but in a state of shock from his demonstration, as the plate he had so nonchalantly knocked off the counter was one of the “Mountain Trails” pattern which, at the time, was selling for around $100.00.

Ed Phillipson broke new ground in many areas. He was constantly searching for the right glaze. He had an awful time perfecting the blue and maroon underglazes, but eventually he did, and Medalta’s green banded hotelware—a thin line on each side of a thicker band—soon was found in restaurants throughout Canada. He found a way to keep a bright yellow from being destroyed in the kiln, and as a result, Medalta captured large orders from the C.N.R. And it was Ed who invented the machine for making cups with handles already attached. Medalta’s hotel china catalogue dating around 1947 states, in part:

A TRULY SANITAS HANDLED CUP AT NO EXTRA COST...
The handle is an integral part of the Cup and eliminates the possibility of handles breaking from Cups, and what is more important there are no crevices on top and sides of handle to collect bacteria. 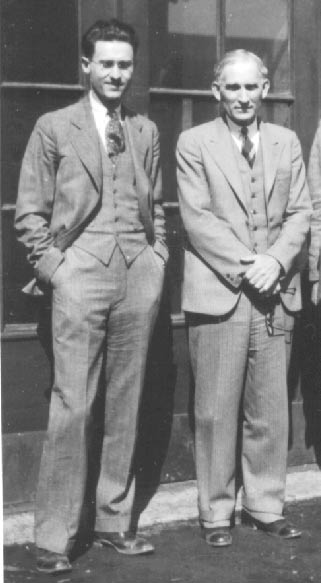