Also, at present, there are not very many collectors of Hycroft. In time, we will probably know as much about Hycroft’s line as we do about Medalta’s as the factory records were included with the gift of the factory to the Friends of Medalta.

An illustrated price list dating to February 1957 provides a fairly good picture of the stoneware products made by the Hycroft plant. While I have actually seen only their one-gallon size, Hycroft listed crocks from 1/4 gallon right up to a 40 gallon one. They also list 3 and 5-gallon ice water jars21, bean pots from 1 to 4 quarts, a Brown Betty teapot and a set of 7, 9 and 11-inch mixing bowls. The mixing bowls have a spiral flute decoration on the outside.

The other items illustrated on this price list are all household ones such as dinnerware sets, a coffee mug, teapot, milk pitchers and jugs, pudding bowls, mixing bowls and salt and pepper shakers. You could get your set in plain white or coloured in yellow, blue, green or pink. The set which the Medicine Hat Potteries called “Matina” ware was referred to by Hycroft as its “Balmoral” shape. It, like the Matina pattern, had a spiral flute design around the rim of the flatwares and on the outside of the other pieces in the set.

While the 1957 price lists make no mention of patterns like “Calico,” I am sure that they too were available. Hycroft took over a working factory, not one that had been closed for several years. They acquired all assets of the Medicine Hat Potteries, including the moulds and patterns, and they surely could have been making the Calico and Chop Sticks patterns if they had wanted to. And by 1959, they were, as Calico and a whole raft of new patterns were listed in its 1959 flyer.


By 1967, they had expanded their line to include: Chinook, New York, Yellow Rose, Yellow Side Rose, Spray Rose, Game Bird, Wheat, and Maple Leaf. Most of these new patterns were produced using brightly coloured decals rather than being hand painted. Finally, in 1969, the last year for which I have records, the Eva and Jill patterns are listed.

However, there are a number of other pattern names which you can find that have not yet been matched to any price lists. These include Fantasia, Dots ‘n Blocks, Cross Weave, Doodles, Mandarin, Gardenia, Reflection and Waterton Park. All of these are probably regular patterns like the rest, rather than a special order for a particular restaurant such as the Bamboo Gardens.

You could, of course, get personalized dinnerware: a set with your name on it, your brand, your favourite subject, or the name of your cafe or restaurant. One of the favoured decorations was to have your personal selection framed within the loop of a lariat.

While flatwares were a mainstay of the plant, they were also into a wide variety of other goods that could be used to make souvenir and commemorative items. These specially made-to-order wares are what Hycroft is best known for in the collectors’ market. One of their most popular pieces was the stetson hat. For a while, perhaps mainly in Marwell’s time, they used the old Medalta stetson hat moulds, but they were soon replaced with their own design. Hycroft’s hat was flat on top with a fairly broad furrow, not high and rounded as was Medalta’s. And, judging by the number of hats that can be found, it was a very popular souvenir and gift item. There are literally hundreds of different ones; so many, that I finally gave up trying to record all the different names. They are getting harder and harder to find at flea markets and antique shows, but with luck, you can still pick them up in the $6.00 to $12.00 range.

Even limiting yourself to Hat ashtrays, I am sure that you could specialize in any subject that caught your fancy and still be able to build a good-sized collection. Political figures such as Senator Gladstone or M.L.A.’s Deane Gundlock and Ray Ellis can be found. Clubs, service organizations and associations are well represented—ones like the Alberta Pharmaceutical Association, the Kiwanis Club and the 175th Battalion Association. You can find the names of grocery or hardware stores, restaurants, trade unions and airlines. You might want to limit yourself to souvenirs giving only the names of Alberta towns and cities such as Calgary, Medicine Hat and Lethbridge. The Calgary Zoo seems to have made a regular practice of ordering hats year after year, as you can find three or four different wordings. I even saw quite a unique one for the Calgary Zoo; it had a miniature “Dino” standing on the top of the rim.

Probably the next most popular item for inscriptions was the small and large safety ashtrays. The small ashtray is six inches across while the large one measures about 8 1/2 inches. In this style of ashtray, the ring of butt holders—and there are twenty or more—is an inch or so in from the outer rim, and that is what made it a safety ashtray. When resting on the butt holder, a burning cigarette could not fall out to scorch your furniture.

Once again you can find every subject imaginable: rodeos, the R.C.M.P. centennial, Canada’s centennial, Alberta’s provincial crest and flower, unions, faculty clubs and so on. Ed Phillipson showed me one that Harry Veiner had given to him and his wife. In the centre was a spray of red roses, and at the bottom, it simply said “Ed & Raye Phillipson.”

In addition to the two styles of stetson hat ashtrays and the pair of safety ashtrays, Hycroft made about eight others including a plain, low round one with three butt holders at an oblique angle, a higher round one with three butt holders at right angles to the rim, two oval-shaped ones, a rectangular one, a square one, and two sizes of wheel-shaped ones. I cannot say for certain that the item in the shape of the province of Alberta was an ashtray, but I think it was. Nearly all of these ashtrays were hand-decorated giving the name of a store or a special event like an anniversary or convention. The round ashtray with the right-angled butt holders was made into a curling trophy by drilling a hole through the bottom for mounting the brass figure of a curler.

Plates ranging in size from eight to fourteen inches in diameter were also popular for producing souvenirs and commemoratives. Many collectors find them more appealing than the ashtrays as when they are displayed on a plate shelf, they can really add to the decor of the room, not to mention the history that they tell.

Ones you can find include 8-inch plates relating to the Social Credit movement in Alberta. Two were made for Women’s Auxiliaries while a third commemorated the three Social Credit Premiers—Aberhart, Manning and Strom. Larger plates like the Fish and Game and the Futurity Stakes series were effectively sets, coming out year after year. The Fish and Game ones are very colourful showing various hunting and fishing scenes. As with the ashtrays, you can find every subject under the sun: a potato conference held in Lethbridge, town anniversaries like Schuler’s 50th, bonspiels, churches23, clubs and a wide variety of businesses. The large 12 and 14-inch plates may have been chosen for special presentation pieces. Ones named to Tommy Primrose, Archie Boyce and Bill Noble might be one of a kind, or perhaps they were given to all who attended a special dinner honouring their community service. Most commemorative plates fall in the $10.00 to $20.00 range, but some like the large 14-inch ones may bring as much as $40.00.

Harry Veiner made a practice of giving gifts to his friends and the regular customers of his various businesses around town. Perhaps, he could even write the cost off as a business expense or political contribution as many of these gifts were marked on the bottom with one of two special stamps.


These stamps have been found on vases and several different plates. One was a calendar plate for the year 1963, another was named to Bill Noble whom I presume was a personal friend of Harry’s, and the other bore the 1967 Centennial maple leaf logo.

In the early 1980s, I had the pleasure of meeting Rose Stickle who was the one who did much of the decorating that you find on Hycroft items. Harry’s warehouse was reportedly full of plates, ashtrays and other items that had gone through the first two or three firings—the biscuit firing, the decal firing, and then the one after the clear glaze had been applied. They were blanks if you like, either plain white or decal decorated items waiting to be finished. 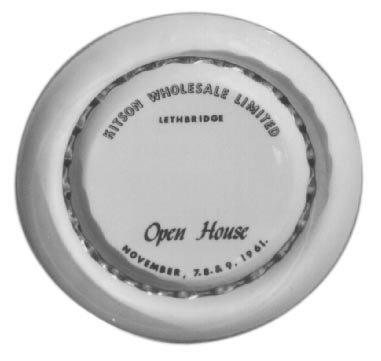 When an order came in for a special commemorative piece or a souvenir, it was Rose’s job to decorate it. Some needed decals, others a rubber-stamping; but, almost without exception, all had to be hand-painted or lettered to some extent. That was what Rose excelled at. She was the one that accented the butt holders in gold, added the hatband, the name of the city or town and, at times, the special presentation verse. It is her steady hand that you see, and if you were wondering why the hand lettering on different pieces looks so much the same, you now know why.

Much of the decorating that Rose did was applied in a gold glaze, but occasionally platinum (silver coloured) was used. Both of these glazes were low firing ones. They could not go through the kiln with the biscuit ware since the gold would just evaporate in the hot flame; therefore, they were fired separately in a low-temperature kiln where the flame was kept around 900 degrees.

The gold trim and lettering done by Rose was applied over-glaze, or in other words on top of the clear glaze. It is for this reason that you often find the gold wearing off your ashtray or plate. The soft gold and platinum glazes simply do not stand up well to repeated washing, scrubbing or rubbing.

In the waning years, Hycroft did not take many speciality orders that required Rose’s delicate touch. Veiner had effectively given up this aspect of the business by 1985.

Hycroft actually had quite a varied line of products, but what they excelled at was the specially named pieces—commemoratives, souvenirs, and advertising items. I believe that if one were to put together a list of these products you would find that Hycroft items number more than all the other potteries put together, including Medalta which had over 700 different ones. 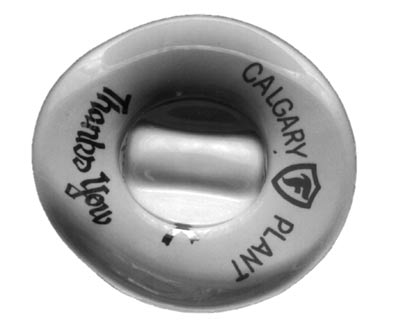 While Hycroft had quite a number of different plate patterns, they were not too successful. They just could not match the cheap price of imports, and homemakers were not prepared to pay the premium for a made in Canada product. In regard to the hotel china market, Hycroft did not seriously try to compete in that field. Their dishes were quite thin and would not have stood up to the heavy use and rough treatment found in restaurants. However, a few restaurants did place orders such as the Bamboo Gardens.