The Glaze or Oxide Stamps or G-Series

This series of stamps is identified by the letter “G” before the number. G.1 simply indicates the first stamp in the series and not necessarily the first one used by Medalta. In this instance G-1 was in fact the first company stamp used by Medalta Stoneware Ltd., and while I have listed them in chronological order as much as possible, they do not indicate a succession from one to the next. Many of the stamps are not yet positively placed in a date sequence for a variety of reasons, but in time we will certainly be able to place more of them accurately.

Some of the stamp numbers are followed by a suffixed letter such as the G.4.a to G.4.c series. This simply lists the varieties of a stamp that I consider to be the same one. Stamps wore out through constant use and had to be reordered on a regular basis, and each and every time new ones were made you ran the risk of injecting minor differences. Some of these differences have proven to be a good date indicator while the significance of other variations is still unknown. 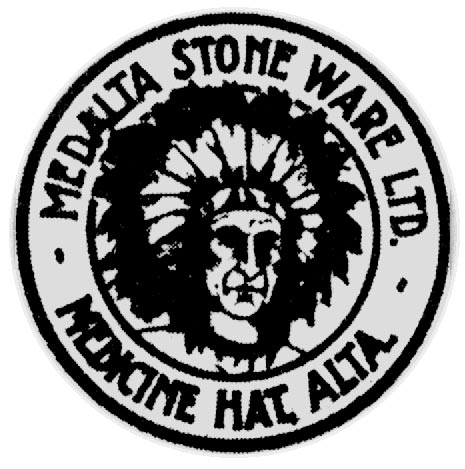 Some of the differences found in similar stamps are the placement of the lettering, the size of the lettering, the size of the encircling oval, ring or rectangle, the presence or absence of those borders, and occasionally the addition of extra punctuation, a word, date or what have you. I did not feel it useful to assign completely different numbers to these variations as they most certainly are very close in date. The suffixed letter may not even be necessary, but in the hope that in time some will turn out to be a specific indicator of date, I have separated them.

And the problem was not rectified with the introduction of its next series of stamps. In 1923, Medalta sought outside help to improve its rubber stampings. A letter from Charles Pratt, Medalta’s manager, to Mr. Bernard Kane in St. Andrews, New Brunswick, looked for answers to some specific questions:

“...We intended to ask you when you were here the best method of stamping names and addresses on Stoneware.

At present we are using Black Underglaze which we get from Roessler & Hasslacher of New York, and using a rubber stamp in stamping all our ware, the goods being fairly dry before we use the stamp. In mixing up the Underglaze we use a little Kentucky Ball clay and water, some glycerine, and a very little gum arabic.

Our stamping is not good and we would like to improve upon it. We do not know where our trouble lies. It may be in the preparation of the mixture, or perhaps it is the rubber stamp, but we are not getting the results that we should expect.

If you have any suggestions or information that would be of assistance we would be very glad to have it in detail...” 4.

Mr. Kane’s answer stated in part:
“...I have made several tests, first trying the ingredients that you use. With these I did not get a good impression. The mixture was not sticky enough...

I got the best results by mixing the black color with mollases (sic), well grinding together on a glass slab with a palate knife, to the consistency of fairly thick paint, then spreading it over the glass slab with the palate knife, then distribute it evenly with a rubber roller, press your stamp once or twice on this surface and stamp your work. This will give a good impression.

Use a little water to thin the color if necessary. ...The rubber stamps should be well backed with cushion rubber. I take it that yours are? You will notice that the large letter M on the trials is not so clear as the other devices. It was not mounted therefore it did not print as well as the others...”5

Presumably Medalta took Mr. Kane’s suggestions to heart. They not only continued to back the rubber stamps heavily with cushion rubber until the plant closed, but increasingly produced more and more stamped products, particularly advertising pieces. And the stamped products that have been seen certainly showed a marked improvement over those of the early years.

For the first ten years or so, until about 1928, Medalta’s oxide stamps seem to have been limited to select products such as the crocks, churns, ice water jars and some of the jugs. Perhaps it is a sampling error but their mixing bowls, pitchers, foot warmers and jardinieres among other products do not seem to have been stamped. No examples of items marked with one of the stamps of Medalta Stoneware Limited have shown up as yet, and personally, I think that none ever will be found. The company just was not marking most of its products at that time, not even with an in-mould stamp. The majority of the items illustrated in the 1924 Medalta catalogue cannot be found with the Medalta name on them. But sometime after 1928, probably within a year or two, Medalta started putting its name on products faithfully, and unmarked ones became the exception.