It is not my intention to discuss each of the stamps here giving the reasons as to why I have assigned a particular date range to each of them. But there are some who might be interested in such detail, so it is given in Appendix I. All the stamps for which I have illustrations are shown in Table I, but I am sure that more or at least new variations will still be found.

I would like to point out a few overall observations though. Where I have no idea as to when a stamp was discontinued, it is given a broad range. If the stamp was in general use, that is used on a wide variety of products, the range may be through to 1954 when the plant closed. If it is one of the hotelware stamps, the closing date may be in the late 1940s when Medalta introduced its dated series of stamps. The date range given for a stamp does not mean that it was in use for that whole period of time, but rather that it cannot presently be narrowed any further.

I was tempted to exclude stamps that were used on a particular product as they do not help to date anything other than that item, but as many of them were included in the Symonds’ book, and since they are often the only indication that Medalta made the item, I decided to leave them in. But the name Medalta had to appear as part of the stamp. Medalta’s early ice water jar for example is not included as it is invariably found with a regular factory stamp on it as well. Other stamps like the egg beater jar, the later ice water jar, and the water filter are included as there is seldom any other stamp on them.

Among the illustrated stamps you will also find a few that make no mention of Medalta - the one that just says “Made in Canada”, the pair of “Western Motifs by Hulme”, the “Confetti”, and the “Aristocrat” stamp - but all have been positively identified as valid Medalta stamps. The products bearing these stamps were made in the Medalta plant. 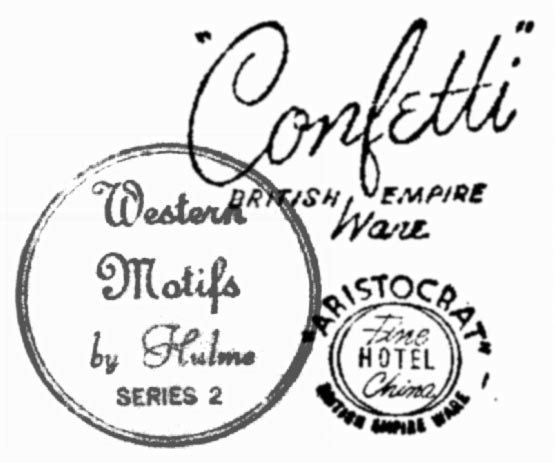