The In-Mould Stamps or M-Series

This grouping of stamps includes ones that are either impressed or embossed on the product. Few of the impressed stamps were actually stamped into the plastic clay by Medalta’s staff, but were in fact produced by the Medalta name being on the working mould in raised or embossed letters. When a casting was made, the name would come out as an impression. For grouping purposes, though, anytime that the Medalta name appears as an impression, regardless of how it was actually made, it has been placed in this group. If the Medalta name is ever found simply cut or carved into the clay, it too would be placed in this grouping. 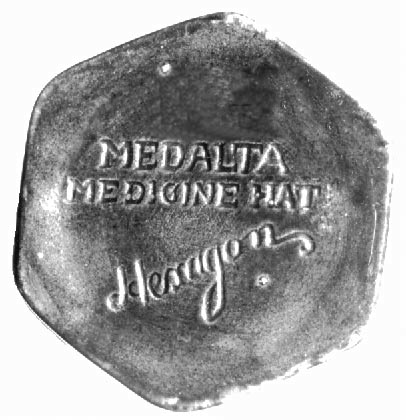 The embossed or raised lettering stamps are not very many in number and almost appear to be an afterthought. “Whoops, we forgot to mark this one ‘Made in Canada’ better add it now before it’s too late.” So far, it is only two variations of “Made in Canada” that have appeared as embossed stamps. I am in fact surprised that other stamps have not shown up, as it would be relatively easy to add the Medalta name by carefully carving it into the plaster mould

One of the oddities that has appeared on a mixing bowl was a stamp reading “Madalta” rather than “Medalta”. If this had been an embossed stamp, one could chalk it up to a frustrated employee who had carved the misspelt name. But it was an impressed one, one in the mould. How it could have happened remains a mystery to me, unless it was just one of those really bad days!

The in-mould category of stamps is almost impossible to date beyond placing the starting date as based on the introduction of any particular product. Once a master mould was created, working moulds could be taken from it at any time. If it was a product that remained in production through to 1954, it would look the same as when it first came out. Unless an oxide stamp is also on the piece, it cannot be dated more specifically within the wide range.

Also this group of stamps is often difficult or even impossible to read. Every time a mould was used there was wear and tear on it, slowly wearing off the embossed lettering of the mould. Given enough time, the marking would wear off completely.

But there were other forces at work as well. Many pieces had to be wiped or smoothed off, sometimes filling in the marking. At other times a very heavy glaze was applied, also filling in the impression. This is what Ed Phillipson had to say in reply to a complaint from Medalta Sales Reg’d.

“Bean pots are all marked on the bottom. In the newer moulds the numbers are very clear, but in the older moulds they might be worn off...8

Another point about the impressed stampings is that each was designed to fit the product. While similar stamps may have been used on a particular style of teapot, for example, each would be different in size and/or configuration to fit each size of teapot. The same was true for pitchers and bowls; the larger the piece the larger the stamp itself. However there is one important time indicator in the impressed stamps, and it is the style of the actual lettering. Medalta basically used two lettering styles over the years. The first was a script style where the individual letters had curved sides and flowing tails. The other was a block style of lettering, with straight sides and without the tails. Just when the script style was introduced is not definitely known but it seems to have been in use by 1927, and I think it is safe to say that it was replaced by the block style of lettering around 1932. The script style does not appear on any products known to have been introduced after 1932, just as the block style is not found on items introduced before then. 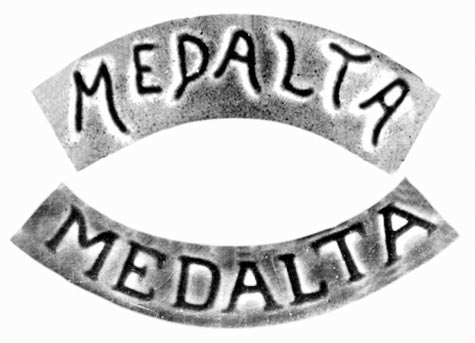 And the last observation that I would like to point out is that mould markings, other than sizes, are not found on any of Medalta’s early products. Many of the products illustrated in the 1924 Medalta catalogue do not have a Medalta stamp on them, either in-mould or an oxide one. The French pans, milk pans, mixing bowls, pitchers, pantry jars, combinettes, bedpans, jardinieres and flower pots are usually found unstamped, and when a stamp is present it is one known to date from a later period.