The date range given for each stamp was determined using various lines of evidence. The stamps themselves provide some clues which may include the clarity of the stamp, the oxide used, the style of lettering and the overall configuration of the stamp.

The ever-changing styles of Medalta’s products were most helpful. Every four years or so Medalta brought out a new style of pitcher, mixing bowl or what have you. New products were continually being added and old ones dropped. Thanks to the records that have survived the ravages of time a fairly complete picture of these product changes are known for the period 1922 to 1941. The earliest years are poorly documented as are the ones from 1942 to 1954. The product succession is almost totally unknown for Medalta’s last twelve years; but, thanks to knowing so many of the dates when products were introduced, we can build up a chronology of the stamps found on them. If a particular stamp appears only on products introduced in or after a particular year, say 1936, then we can at least say that the stamp dates no earlier than 1936. Similarly, if a stamp is never found on a discontinued product and we know when the item was dropped, we can say it dates after that time. Providing the stamp is found on a variety of products, and the sample size is not too small, we can determine its date range within a few years.

You might have wondered why your 500 series lamps are in white clay while the ones with style numbers between 1 and 100 are yellow clay? Well, now you know. And if you do find a lamp which was introduced in the 1930s which is made with white clay then you can be sure it dates much later.

Another obvious help is Medalta’s dated advertising pieces. If for example, the piece says “Xmas 1934”, we at least have a firm date for when it was in use, and as other dated pieces show up with the same stamp, we can build up the range. Another way the advertising or souvenir items are useful is that they show which stamps were in use at the same time. Usually, pieces made for a particular event all have the same stamp on them, but there are exceptions such as Toshach’s mixing bowl. The order for 1500 bowls was filled over a period of time, and several of the maple leaf stamp varieties were used to mark them. By the way, they only received 1200 bowls. I presume the last 300 could not be made in time for Christmas which is when Toshach’s distributed the bowls to their customers and friends 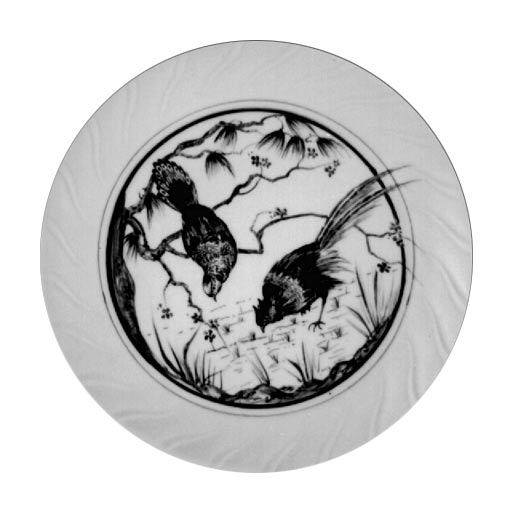 The decoration markings found on items are some help, but not as useful as they would be if they were found more often in association with the oxide stamps. More often they are found on items with an in-mould stamp. Some decoration numbers are actually dated. Starting in 1937 and going through to 1939, Medalta used a three-part code to identify its decorations. A letter - G, L or S - was followed by a two-part number separated by a slash. The first number - 37, 38 or 39 - indicated the year, the second number the decoration. We will discuss this numbering system more fully later, but the important thing is that they were dated and can in turn be used to date the product and the stamp. Unfortunately, they are not found on items very often. The other aspect about some decoration numbers is that they can be related to dated documents in the Medalta files, particularly the stock ledger.

The handpainted versus the rubber-stamped or stenciled decorations is also some help. Most of the handpainted patterns including the sailboat, mill, cottage and cows in pasture were replaced with the more quickly applied rubber stamp decorations or stencils. This seems to have occurred around 1934, but one -the owls - may have been in use for a few more years.

But there are still other clues to help date the products and thereby the stamps as well. The colour of the clay is one. Prior to 1937, Medalta had no white burning clay. It was developed for the production of hotel china, and eventually, after many trials and errors, Medalta developed a mixture suitable for its other wares. The changeover from the “fat” or yellow burning clay to the white semi-porcelain clay is not firmly documented, but it happened in 1941 or just a year or two later.

Another clue is the manufacturing process itself. From its beginning through to 1954 Medalta made many of its products using moulds, but some were made on a press using metal dies. Late in 1937 Medalta acquired a new flower pot machine, and by February 1938 they had metal dies on hand for making corrugated and plain mixing bowls on this machine. And over the next few years, as new products were brought out, many of them were made using dies. If a product could be made this way, it was preferred as it was certainly faster and cheaper than the labour-intensive use of moulds.

The die-made bowls and meat pie pan, among other products, are readily recognizable by the relatively sharp edge of the base. The bottoms of the mould-made items are gently rounded in contrast with the die-made ones which are almost at 90 degrees. And because it was a metal die, it was impracticable to have any embossed markings on the bottom. The limitation of the spinning metal die was of course that the item had to be smaller at the bottom than the top in order to readily release it from the die.

In the hotelwares, you can also find some dating clues. The earliest pieces often show black speckles scattered throughout the white clay, as it was not until 1939 that Medalta acquired a magnetic separator to remove the discolouring iron particles. When hotel china was first produced, the flatwares were stacked in a saggar one above the other, separated by a stilt. After firing, the plate was snapped from the stilt leaving the distinctive triangular mark. Around May 1941, Medalta switched over to using pins instead of stilts. Three metal pins were run through holes in the side of the saggar, the plate was placed on them, and the next one added until the saggar was full. The advantage, of course, was that the top of the plate was unblemished. If you look on the bottom of a plate you will find either the three stilt marks in the center of the plate or the 3 pin marks just in from the edge of the rim.

There were other useful clues that I was not aware of at the time I examined the archival collections and products, or ones that I have not yet taken into consideration. The use of gold and silver oxides for stamping products is one. It certainly dates towards the end of Medalta, but just how late I do not know. I gave up recording the colour of the stampings fairly early in my research as it did not seem to be worth pursuing, but in this instance, it might have been. Another fact not yet taken into consideration was Medalta’s acquisition of an oval jigger machine late in 1938 to make products like bakers, casseroles, au gratins and rarebit dishes.

In sum, what it boils down to is that you can establish a fairly good date range for many of the stamps when all the various lines of evidence are put together. There will always be anomalies as Medalta retained some of its rubber stamps long after they stopped using them. Indeed, the collection of rubber stamps acquired by the Glenbow Museum included one used as early as 1934, and some of the early hotel china stamps from the late 1930s along with dated ones from the 1950s. I am sure that the workmen grabbed the wrong stamp from time to time, but it seems to have been the exception as remarkable consistency is found in the use of most stamps. This was proved when I had the opportunity to check the stamps on named hotelwares against the scribbler entries that had been kept by one of Medalta’s decorators. Her dated entries recorded the various names of the restaurant patterns that she worked on, and there was a remarkable agreement between them and the dated stamps on the products - 1951 stamps were in her 1951 ledgers and so on for the time she worked at Medalta.