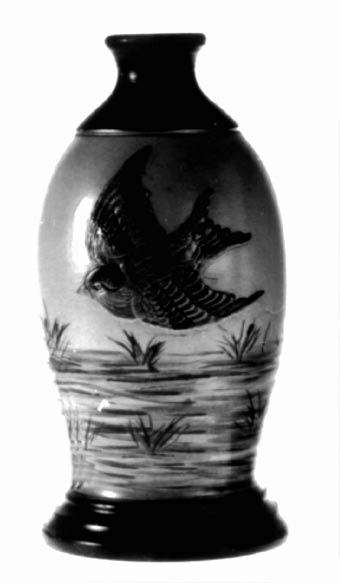 The assigning of style numbers, and in some cases, names, started shortly after Medalta introduced its new artwares in 1930. The first artwares included the handpainted/glazed pitchers done in the decorative owl, mill and cottage designs. The three or four lamp bases and ten or so vases that were available were usually finished in a variety of designs using coloured lacquers. The first lamps and vases were hand thrown and accordingly marked with the “HAND MADE” stamp (M.6). The variety of products was fairly limited the first year, but as their designers brought out new shapes, it soon became apparent that Medalta needed a quick and accurate way of referring to each style. By the end of 1931, Medalta had gone back and assigned style numbers to its vases and two styles of jardinieres. They started at 101 assigning the numbers consecutively through to 112, but at this time the numbers were not yet in the mould. That would be done as the old moulds wore out and new ones were made to replace them. But they did start numbering the various styles by penning the number on the bottom in white or black ink, and at the same time, the decoration number was added. A typical example would be “106/1500”, the 1500 standing for the camels in desert decoration on vase style No. 106. The next year, 1932, saw Medalta bringing out a variety of new vases and these ones had the style numbers in the mould.

The in-mould numbers are found in various forms. The series from 101 to 112 are just a number. Most of the ones assigned after that are preceded by "No.” but not always. Again it seems to have been a hit and miss thing, with no rhyme or reason as to why one has just the number and others the full entry, but the full entry is by far the most common one. The style number can be found alone, with the size or other numbers below it, and it can be found with the size or decoration number appended to it. The size number is usually in-mould as well, while the decoration number is invariably added using a white or black ink oxide.

Quite a few of the lamps have the number stamped on the inside of the bottom in black ink as just a number or as a number preceded with the number sign such as “55” or “# 53”. In one instance the No. 55 lamp base was clearly stamped with the number “57” showing that mistakes were sometimes made right at the factory