The last size markings to be examined are those that indicate the height of the item. These are the ones commonly found on Medalta’s artwares. Once again the numbers can take many forms and are located in various spots in relationship to other markings. The numbers are often impressed, but on early pieces, they can be found in oxide, often white, penned on the bottom of the piece. I have even found a few items where the style No. and size were marked in grease pencil or using a lead pencil. The number can be alone or followed by the inch sign. It can be appended to the style number with an intervening slash or it can be below all other markings. One thing I have never run across though is a size that is in raised figures. 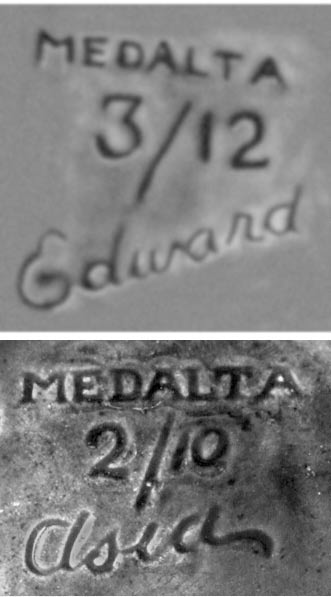 The reason for placing the height on many items escapes me, and it was truly hit and miss as you will find many items that were not marked at all. In some instances, the size was necessary to distinguish between the two or more sized vases given the same style No., such as the No. 2 vase which came in 10, 12 and 14-inch sizes. Others like the vases numbered 115 to 118 were made in only one size, so it hardly seems necessary to put the size on the item. Perhaps they just wanted to bring a better balance to the stamp.

In several instances, it appears that Medalta made mistakes in its marking. The Edward vase, or vase No. 3, was available in the 10 and 12-inch sizes and is so marked with an impressed size on the bottom. However, the 10-inch one only measures 7 5/8 inches high and the 12 inches only 9 inches. Was it a mistake? Did Medalta change the moulds at the last minute? Who knows, but they sure do not appear to be right. A few other in-mould heights are out by an inch or so, but none this much.

Another example of a mistake is found in the Asia vase, style No. 2, which was marked on the bottom in oxide “#2 - 10”, but it is definitely a 12-inch high one. Half a dozen other examples could be pointed out, but I will leave it to you to find out for yourself just how far out they were at times.